A new project of the Center for Research and Development of Higher Education named “Professional and Global Educators’ Community (PAGE)” was launched on Monday, February 15th, 2016, which was about a week after the announcement of successful applicants of the University of Tokyo who were selected by the special recommendation for the first time. With the globalization of higher education, it is expected that an increasing number of classes will be delivered “in English” for university students and overseas students here in Japan. Both students and faculty members at the University of Tokyo are now involved in this transitional period. 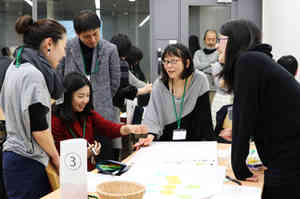 PAGE was launched to help faculty members at the University of Tokyo and graduate students and postdocs who will be teaching at universities adapt themselves seamlessly to such changing situations.

Despite the chilly and cloudy weather in February, a total of 14 participants, composed of young researchers and graduate students, gathered at Fukutake Learning Studio, Hongo Campus. In addition to them, we also made the program open to the faculty members coming from the University of Tokyo and other universities, who happened to know the workshop through our announcement and kindly made inquiries to us. 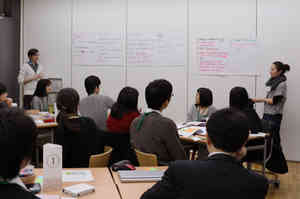 The participants were divided into four groups. Following the opening remarks and introductory lecture, they worked on a case study. The case was illustrated through a drama, which was set in a classroom with a majority of students coming from overseas. The participants watched this video together, imagined what a global classroom was like, and brainstormed the measures to deal with the various problems occurring in the drama.

Subsequently, each group chose one of the problems, decided a measure to deal with that, and discussed what kind of behaviors and English phrases would be effective in changing the situation for the better. Unlike making presentations at a conference or a seminar, however, teaching in English requires using a considerate manner of communication where you keep an eye on every learner’s reaction and maintaining a harmonious atmosphere of the whole classroom. The participants expressed their ideas freely and carefully examined what words they should use in the situation.

Each group started their presentation by describing which problem they chose and the measure to deal with that, and then shared their specific ideas on how to approach and speak to the students by showing the English scripts posted on the wall. Some participants voluntarily performed an English drama by role-playing during the presentation, which created an atmosphere full of improvisation and laughter.

Every group received feedback on their ideas from the two instructors: Jun Nakahara and Kayoko Kurita, (both Associate Professors at the Center for Research and Development of Higher Education). In the end, participants actively exchanged their ideas on the presentations with one another.

Regarding the nuances in each English expression and frequently used phrases in a classroom, the facilitators, who were fluent in English, gave tips on the participants by using their ideas.

Here are some of the feedback we received from the participants after the workshop:
“It was such a high-quality workshop that I can’t believe the program was prepared in a short time. I had fun.”
“I realized that the important thing is to improve my basic language skills and gain experience in teaching in English. I wish you would offer us more opportunities to practice teaching and brush up the skills.”
The participants seemed to be satisfied with the workshop and looking forward to future programs. It was a small-scale workshop, but it was fruitful for PAGE staff, too.

The campus will be full of new students in April. The overseas students enrolling in short-term summer study abroad programs and exchange students will also look forward to having learning opportunities at our university. In order to contribute to the people teaching in English in the increasingly globalizing higher education settings, PAGE will continue to plan and hold various programs. 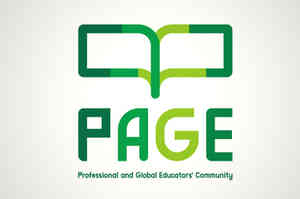